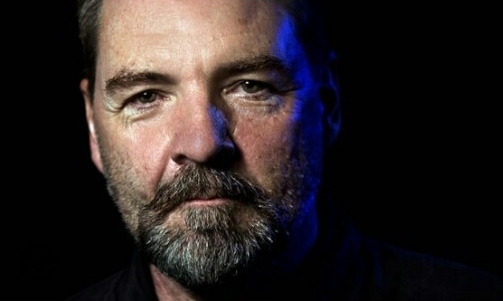 Brendan Coyle (birth name David Anderson Coyle) was born on 2 December 1962 in Corby, Northamptonshire, England, UK.  His Northern Irish father and Scottish mother emigrated from Strabane, County Tyrone, Ireland to settle in the Midlands.  Brendan’s father, a master butcher, ran a shop in Rugby, Warwickshire, where Brendan began learning the trade as a young man.  After Coyle left school in 1979, he worked as a meat trimmer in the butcher shop, until his father’s untimely death when Brendan was 17.

After developing an interest in acting while seeing Richard III at the Belgrade Theatre in Coventry as a teen, Brendan moved to Dublin, Ireland in 1981 to begin studying drama at the Focus Theatre’s Acting Studio.

His aunt, Mary Elizabeth Burke-Kennedy, co-founded the theatre in the 1960s, running it with Deirdre O’Connell, an Irish-American woman who had studied at the Strasberg Institute in New York.

In 1983, he earned a scholarship to the London Mountview Academy of Theatre Arts, auditioning with “Philadelphia, Here I Come!”, before a panel including Judi Dench and Twiggy.  Brendan received the largest scholarship the Academy had ever given at the time, and he returned years later to direct plays for Mountview Academy.

Afterward, Brendan toured Ireland as a stage manager with the Trapdoor Theatre Company, gaining a few bit parts in the process.  He also toured Ireland with Rough Magic and toured Europe as a member of Leeds Laughing Stock Children’s Crusade Theatre Company.  Acting in fringe and pub theatre, Brendan appeared in primarily Irish plays, both in Britain and Ireland, including Stephen Daldry’s “The Ragged Trousered Philanthropist” in 1987.  He moved on to play Christie Mahon in “Playboy of the Western World” and Private Gar in Dan Crawford’s “Philadelphia, Here I Come!” in 1992.

In 1992, Brendan also made his television debut with small roles in the made-for-TV movie “Fool’s Gold: The Story of the Brink’s-Mat Robbery” and on the ITV series “The Bill”.  He also moved from primarily Irish short films into feature films in the nineties, while eventually landing larger television roles, including Nicholas Higgins in “North & South” and Robert Timmins in “Lark Rise to Candleford”.

He continued to act on the stage, winning the 1999 Laurence Olivier Award for Best Supporting Actor for his role as the barman, Brendan, in Conor McPherson’s multi award-winning play “The Weir”.

He appeared as John Bates, the lame valet, in the period drama series, “Downton Abbey”, for which the cast won the 2013, 2015, and 2016 Outstanding Performance by an Ensemble in a Drama Series Screen Actors Guild Awards. The show previously won 2 BAFTAs, 12 Emmys, 3 Golden Globes, 3 National Television Awards, and a Broadcast award.  Brendan has personally received BAFTA, IFTA, and Primetime Emmy nominations for his role.

In 2012, he was presented with the Basauri Award for Excellence in the Performing Arts in Spain and in 2018, Coyle became a member of BAFTA.

In 2018-19, Brendan performed the monologue play “St Nicholas”, which was written by Conor McPherson.

The play, performed at the Donmar Warehouse, Dublin Theater Festival, and the Goodman Theater in Chicago, was exceptionally well received and critically acclaimed.

Brendan has generously donated a great deal of his time to various charities.  He is an honorary patron of the Origin Theatre in New York, including 1st Irish, which is a celebration of the best of Irish theatre.  Additionally, he was a Performing Arts Patron at The King’s Lynn Arts Centre in Norfolk, and assisted Arts Educational Schools, London.

Coyle also supports Centrepoint, the UK’s leading charity for homeless young people, Work-wise, which helps young people find jobs, and serves as an ambassador for Prostaid, a prostate cancer charity.  Brendan is also a patron of Lakelands Hospice in Corby, and narrated a documentary film for their benefit.

He has done adverts for TK Maxx’s “Give Up Clothes For Good” campaign, the World Food Programme, and the Macmillan Cancer Centre. He has read for the Great Ormond Street Hospital Children’s Charity, which provides care to sick children and RAPt, which works to help people with drug and alcohol dependence.

Brendan has spoken out for the Christina Noble Children’s Foundation and, along with the cast and crew of “Downton Abbey”, helped raise funds for Merlin, the UK medical relief charity and Acting For Others, an annual fund-raising event for all theatrical charities.

Brendan has an older brother and is a great-nephew of legendary football manager Sir Matt Busby of Manchester United F. C. fame.  He has maintained a life-long love of football and enjoys gardening, cooking, music, art, and literature.