Set in 19th century Oxfordshire, a young girl moves to the local market town to begin an apprenticeship as a postmistress. 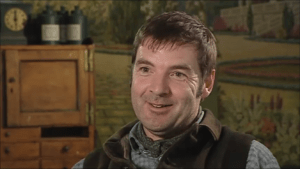