In post-ceasefire Northern Ireland, a Dublin cartographer, Richie, accepts a job just north of the border in a politically and religiously-divided community. In the course of mapping the area, Richie discovers the body of an alleged informer, Nolan, killed years earlier and he realises that the key to understanding the mystery lies in the map he is commissioned to draw. 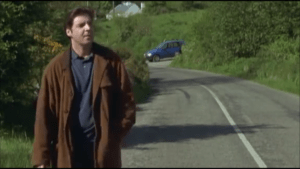